What an amazing few weeks we have been having, and it is all due to a new addition to our family.

Introducing Piper.....
﻿
She is an amazing little dog, and we can't believe she has only been in our family for over two weeks now!

What is she crossed with?  I hear you ask.  Well, that will be something we will be happy to share with you in the future, as we have organised a Mixed Breed DNA test for her.  The results are only a few weeks away, so when I know, it shall be shared.

It was an interesting experience for me to go out and look for a new family member.  In the past, they always ended up on my doorstep. As a kid, I adopted a puppy called Digger (up until I was 7), then we had Burek (until I was 23), then my Dad and I had Jenna until I moved out.  Jenna stayed with him until 2005.  In 2000, we had Sugar (a lovable escape artist Maltese terrier) whom we had a client sign over ownership, as she was otherwise going to be euthenased.

Shortly after that we adopted Teddy from people who were renting, and couldn't look after him any more.  And that gets us to 2010, when Teddy passed away.  And we have been without a dog since then. (We had three cats at home, and all of the puppies at work to keep us happy)

Until I caved into my kids who felt the emptiness in their hearts that only dogs can fill. As we are believers in adopting pets, and as we are not fussy on breed (they are all beautiful in my eyes), the RSPCA and other pet rescue websites began to be the most visited page during our spare time.

It was decided one Saturday afternoon, to drive to the RSPCA in Sydney. We did have some strict criteria though - we needed a dog that was cat friendly, and that was up for an active lifestyle.  The Yagoona branch, sadly, didn't have anything suitable. They were either too big, too slow, had severe hip problems that were more suited to a sedentary lifestyle, or just didn't like cats.

It was 4 in the afternoon, it was hot, I was tired, and ready to go home.  We were all despondent, but as I kept on saying, there is always next weekend!

The girls (, however, encouraged me to drive that little bit more, and head up to the RSPCA at Rouse Hill.

Aren't we glad we did.  There were only two dogs there.  One didn't like cats at all - it was a bit older, and looked really sweet.  Darn!  The other little puppy was fast asleep on the trampoline bed - not too worried about who was coming or going.

Do we or don't we wake this one up for a meet and greet?  Well, no prizes for guessing what we did.

Piper (who was known as Tammy then), came out  to meet us - and the first thing she did was to come up to me, roll on her back and show me her beautifully shaved tummy!  She only had surgery the day before, but showed no signs of being sore.

It didn't take long for the decision to be made - in fact, Piper had made it for us!   After signing some papers, and sorting out the money side, we were her new family!

We found out that she was one of four puppies, three girls and one boy, and she was the last one. Her sister (called Liz, believe it or not), had just found her new home a few hours earlier. 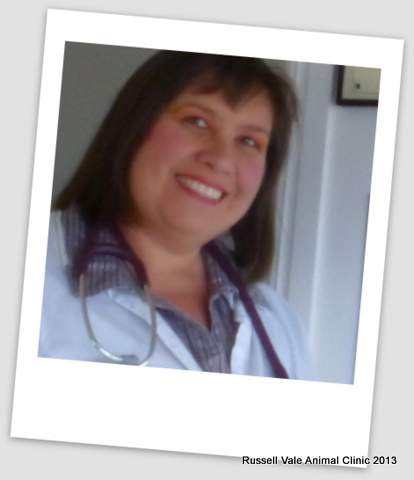 You will get to hear a lot more about the lessons that Piper is teaching us in the coming few weeks, months and years.  Meeting our cats, coming to work, visiting Puppy classes in Wollongong, and much much more!

I am Dr Liz, the mad animal vet from Bellambi.  Why not share stories of the first moment you laid eyes on your dog or cat?

If you have any questions on puppy care or behavioural issues, call us on 02 42 845988, as we are fast becoming experts on the more unusual puppy problems, and how to deal with them.

For Email Marketing you can trust